Turkey corruption: Gold trader’s arrest in Miami could put President Erdogan in the spotlight once again

Reza Zarrab was accused in 2013 of bribing senior ministers from the ruling AKP with cash and lavish gifts as part of a scheme to bypass US sanctions on Iran. His arrest threatens to reopen a case that reached right into Mr Erdogan’s inner circle.

A Turkish gold trader at the centre of a corruption scandal that engulfed President Recep Tayyip Erdogan has been arrested in Miami and charged with laundering millions of dollars.

Reza Zarrab, also known by the name Riza Sarraf, was accused in 2013 of bribing senior ministers from Turkey’s ruling party with cash and lavish gifts as part of a scheme to bypass US sanctions on Iran.

On Saturday, the 33-year-old was arrested while on holiday in Florida with his wife and daughter. The arrest was made public late on Monday night when US prosecutors unsealed an indictment that charged him with fraud, money-laundering and sanctions-busting.

The arrest threatens to reopen a case that reached right into Mr Erdogan’s inner circle and to tarnish the party that he founded. It will also deepen existing tensions between Turkey and the United States. The US attorney in charge of prosecuting the case, Preet Bharara, became an overnight sensation after tweeting that Mr Zarrab would “soon face American justice in a Manhattan courtroom”.

Mr Bharara was bombarded with messages of support from Turkey, where opponents of the government have increasingly turned to social media in the face of a crackdown on critical news outlets. Mr Zarrab, an Iranian-born Turkish citizen, was detained and charged in Istanbul in 2013 in a huge corruption case that posed the biggest challenge to Mr Erdogan, the man who has dominated Turkish politics for more than a decade as Prime Minister and then as President.

The allegations centred on a claim that Mr Zarrab was using a loophole in US sanctions on Iran to buy oil and gas in exchange for gold. The businessman, who owns a private jet and is married to a Turkish pop star, was accused of bribing senior ministers in the ruling Justice and Development Party (AKP) in order to facilitate the transfers.

The gifts were said to include a $37,000 piano, a $350,000 watch and millions of dollars in cash. Mr Zarrab was allegedly able to call in favours from ministers that ranged from the release of an impounded plane to a request for a police escort to help him escape Istanbul’s notorious traffic jams.

The allegations exploded into the public domain in December 2013 with a string of high-profile arrests. Three cabinet ministers resigned after their sons were implicated. Mr Erdogan decried the investigation as an attempt to overthrow his government by supporters of his ally-turned-enemy, Islamic cleric Fethullah Gulen. He ordered a huge purge of police, prosecutors and judges. All charges against Mr Zarrab and those linked to the government were dropped. Mr Erdogan later described the businessman as a “philanthropist” whose work had “contributed to the country”. 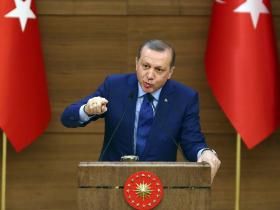 President Erdogan says freedom and democracy have ‘no value’ in Turkey

Lawyers for Mr Zarrab said that the US investigation had “absolutely no link” with the 2013 scandal. Mr Zarrab has not yet entered a plea. His lawyer told the Turkish newspaper Hürriyet that the latest accusations against him “can all be explained”. He is next due in court at the start of April.

The indictment accuses Mr Zarrab of using a global web of firms to hide the fact he was conducting transitions for or on behalf of Iranian entities.

Mr Bharara has earned a name for himself as someone willing to tackle the big beasts of Wall Street, as well as corrupt politicians. The backlash against him began within hours of the announcement of Mr Zarrab’s arrest. The pro-government newspaper Sabah used Twitter to share a doctored photograph that supposedly showed him collecting an award from a charity linked to Mr Gulen, the President’s arch-foe.

Turkish president wants to be able to label journalists as terrorists

Ryan Gingeras, an academic who has written a book on organised crime in Turkey, said that American prosecutors “undoubtedly” understood the political stakes. “The indictment alone will raise tensions between Ankara and Washington,” he said.

Nigel Kushner, an expert on Iranian sanctions at the firm W Legal, expected US authorities to seek to prosecute the widest possible network of offenders. “In these types of situations, one or two whistleblowers will likely play ball in order to obtain reduced sentences or fines,” he said. “This will give the US authorities the evidence to help pursue others. The US will want to send a powerful message. This will likely not be limited in scope.”

Kemal Kilicdaroglu, head of the opposition People’s Democratic Party (CHP), predicted that “all the dirty laundry will come out”. He said: “Many people won’t sleep a wink tonight.”

Previous Who’s the recipient of the Zarrab ‘message?’
Next Brussels attack : Inside Airport